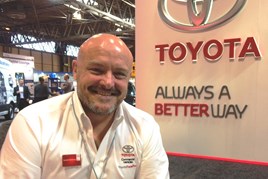 Toyota’s franchised dealers took a “leap of faith” in supporting the brand’s new push on commercial vehicle sales but things are starting to take shape, according to LCV manager Gareth Matthews.

Just 12 months after taking up his current post, Matthews was keen to reflect on a busy year working with a resurgent Toyota LCV operation when AM caught up with him during this week’s Commercial Vehicle Show, at the NEC in Birmingham.

And after establishing a network to support registrations of the Proace van and Hilux pick-up unveiled at last year’s event, he was keen to report progress as he targets “profit rather than sales” for his fresh group of LCV retail partners.

“Our current LCV strategy has only really been around for 12 months and we have come an awfully long way in that time,” said Matthews.

“Launching product was my main priority when I arrived – with the new Proace and Hilux arriving around that time – and since then we have established a network of 25 Business Centres which have become LCV specialists.

“The training that supported that transition saw 980 people take part in a nine-day residential course. This year we’ve broadened that training into the network via an online training facility detailing legislation changes and other things that LCV sale require knowledge of.

“We’ve come a long way and for those larger retail groups that invested in becoming specialist centres it was something of a leap of faith to put their weight behind the new strategy and support what we are trying to do.”

Matthews said that Toyota invited its network partners to apply for specialist LCV status after carrying out a study to identify key geographic areas which could benefit from the additional potential revenue stream.

Business plans were submitted by retailers ahead of selection and he said that he wanted those who truly “bought into” the idea of selling commercial vehicles.

Toyota then contributed to the salary of an LCV specialist at each site before delivering appropriate training.

Matthews said that a commercial vehicle display and servicing facility were among the prerequisites required of the LCV specialists.

But he said that some retail groups have voluntarily gone a step further. He said: “At this stage standalone LCV sales facilities were really not part of our thinking, they certainly weren’t something we were demanding.

“Two of our partners have taken that step, however, with Snows Group one of those creating a new site in Plymouth.”

Matthews said that Toyota had registered 770 Proace vans and 6,504 Hilux pick-ups in 2016, but said that he hoped to see the former return to the 2,500 sales it achieved before it was removed from the market and the latter achieve between 7,500 and 8,000 annual registrations for his retailers.

One way of helping its sites make a profit has been through channelling its large fleet sales into its specialist sites for aftersales purposes, as a new deal with Arval has dictated, and helping retailers to prospect for SME business.

The focus is on profit, not sales, according to Matthews, who added: “With the specialist network the aim is to build local relationships.

“Take your LCV sales online or from a central point and all you are doing is competing nationally at the lowest possible price. We want the customer to see value in the service we offer.”

Showcasede on the manufacturer’s stand were the first models to be made available for conversions: a new internal racking system for the Toyota Proace medium-duty van, built and fitted by Bri-stor of Stafford; a Toyota Hilux Extra Cab tipper built by the TGS Group, based in Bristol; and a refrigerated Proace prepared by Coolkit Ltd, in Burnley.

The newcomers will be available through the new Toyota Trade Plus programme, supplied as complete units ordered through any Toyota retailer and delivered ready to go.

Matthews said: “These programmes have been developed in direct response to customer demand and the regular enquiries we were having about whether we could supply refrigerated vans or tippers for our all-new LCV line-up.

“What we are seeing today is the continuation of an exciting new LCV strategy that will see more businesses becoming Toyota Authorised Converters, and more types of vehicles being introduced to meet an even wider range of customer requirements.”