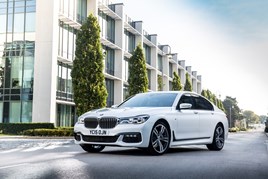 BMW has been banned from running an ad for its 760Li xDrive by the Advertising Standards Authority.

The campaign, featured in the Telegraph Magazine on January 14, included the headline claim "LUXURY JUST LOST ITS MANNERS." Further text stated "Introducing the BMW M760Li xDrive. M Performance TwinPower Turbo technology. 6.6 litre V12. 610 hp. 0-62mph in 3.7 seconds. For some, the climb to the top is quicker".

BMW told the ASA in a response that they had included the car specifications in the ad to inform consumers. They explained that their target audience for the vehicle were ambitious “high-net-worth” business leaders. They said that the claim “for some, the climb to the top is quicker” was not, therefore, a reference to the acceleration of the vehicle but to their audience climbing to the top of their careers.

The Telegraph added it did not believe the ad focused on speed. They highlighted that 62mph was below the UK motorway speed limit.

The ASA upheld the complaint, stating: "The ad featured the prominent headline claim “Luxury just lost its manners”, which was followed by two of the vehicle’s notably high performance specifications: 610 horsepower and acceleration from 0 to 62mph in 3.7 seconds. In that context, the ASA considered consumers would interpret the headline claim to mean that, unlike other luxury cars on the market, the BMW car was notable for its fast acceleration and powerful engine."

The ad breached rule 19.4 and 19.2 of the CAP advertising code, and must not be run again in its current form.