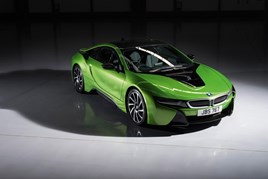 The German premium car maker revealed the results yesterday as it launched a £2,000 scrappage-style incentive scheme to encourage UK motorists out of diesel cars of Euro-4 emissions standards or older.

The BMW Group has nine electrified automobiles on the market and sales totalled 50,711 in the first seven months of the year, making the group the world’s 3rd biggest BEV/PHEV manufacturer.

The company also sold more vehicles than ever before in the first seven months of the year with a total of 1,401,551 (+4.3%) vehicles delivered to customers around the world.

Dr Ian Robertson, management board member for sales and Brand BMW, said: “Following a record first half-year, our sales in July remain at a very high level, with profitability our primary focus.

“Despite continuing headwinds in the USA, as well as the model changeover of the BMW X3 and the BMW 5 Series in China, we were still able to achieve last year’s high sales levels, due to our policy of balanced global sales growth.

BMW Group sales in Asia continue to grow this year, driven mainly by China, where combined BMW and MINI deliveries are up 17.0% in the first seven months of the year.

The downturn in the US automotive market is reflected in the BMW Group’s figures for the Americas, which in the year to date are 3.5% below last year’s level.

BMW launched its £3,000 incentive for UK motorists to ditch diesel yesterday as Auto Express reported that the Volkswagen Group were likely to follow suit.

Both brands have been offering discounts to their German customers in a bid to reduce NOx emissions as part of an agreement brokered with German authorities.