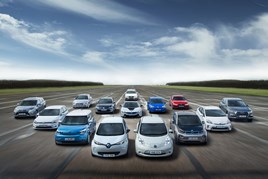 Motorists in the West Midlands emerged as the keenest adopters of AFVs as electric car registrations reached their highest ever levels in H1, 2017.

June exceeded all previous non-plate-change months with 4,405 new plug-in models sold during the month (33% up on June 2016).

Demand from private buyers has driven growth with 44.9% more consumers opting for plug-in hybrid and electric power between January and June 2017, compared to the same period last year.

“The total number of plug-in cars on our roads is at record levels, with the latest figures showing that there are now over 100,000 plug-in cars and vans registered in the UK.

“The UK is a world leader in tackling climate change and the Government is committed to supporting the transition to a low carbon economy and improving air quality.

“Our aim is that nearly all cars and vans on our roads are zero emission by 2050.”

The Nissan Leaf was the UK’s best selling plug-in car in the first six months of 2017, while BMW’s plug-in hybrid 3-Series saloon was one of the year’s biggest growers, rising 79.9% following its launch last year.

“They are fast becoming a serious consideration for an increasing number of motorists who are switching on to the cost-saving and environmental benefits of driving an electric car.

“With fully-electric cars able to go further than ever, and an increasing number of plug-in hybrids on the market offering motorists the best of both worlds, it is harder than ever to ignore the benefits these cars bring.”

Motorists in the West Midlands were keenest to embrace AFV technology, with 2,704 of the period’s registrations accounted for by the region.

Greater London (2,477) and Cambridgeshire (1,928) also made the top three regions with the highest uptake.

Greater London also saw the biggest year on year increase in counties registering more than 1,000 plug-in vehicles, with registrations up 68.6% on the first half of 2016.