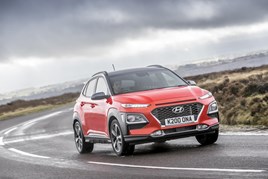 Following in the footsteps of Ford, Vauxhall, Toyota, Volkswagen and Audi, the Korean brand will be offering up to £5,000 (Santa Fe) off a new car throughout Q1.

The scheme applies to diesel and petrol-powered vehicles of any make or model that are Euro 1-4 emissions standard (cars registered before December 31, 2009) but does not demand scrappage of all older vehicles.

Under the terms of the scheme, only the most polluting Euro 1-3 emissions standard vehicles, will be scrapped.

Nor is the scheme restricted to lower-emitting vehicles like the Ioniq hybrid and EV models, which have now been added to the scheme and attract a total of £3,500 discount when combined with the government’s own £1,500 ULEV grant.

However, Tony Whitehorn, president and chief executive of Hyundai Motor UK, said: “Hyundai is fully committed to improving the efficiency of its product line-up and to lowering emissions.

“Our Scrappage and Emissions Reduction scheme has made the change into new, cleaner and more technologically advanced vehicles even easier for over 2,700 customers since we launched it back in September 2017, so we are very pleased to announce the extension of the scheme until March.

“The scheme has been enhanced to introduce not just our brand new small SUV, KONA but also the award-winning Ioniq Plug-in Hybrid.

“Alongside the Ioniq Hybrid, it’s now even easier for customers to make that step from a conventional ICE vehicle into one with an electrified powertrain.”

Back in 2008, Hyundai was the first car manufacturer to introduce a scrappage scheme which ran from April 2009 to March 2010 and was also one of the main beneficiaries of the initiative, starting a decade of sales growth.

Over that period, Hyundai claims to have enabled over 45,000 customers to move into new, safer and cleaner cars.

The full range of customer scrappage scheme incentives available via the brand’s latest scheme are as follows: