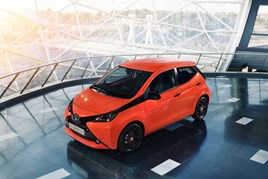 Toyota retailers have been taking to social media to publicise the extension of the Japanese brand’s diesel scrappage scheme to the end of January.

While the manufacturer failed to announce the scheme with the fanfare of Ford, foregoing the usual press release issued to various media outlets, dealers have been taking the lead in marketing the extended offer to customers.

Burrows Toyota in South Yorkshire, HW Moon in Wigan and WR Davies in Stafford were among the first to take to Twitter to share the news yesterday.

A spokesman for Toyota told AM: “The network is doing a great job of communicating the extended offer and I think that is seen as the best way for us to reach customers in this case.

“The scrappage scheme has been a huge success for us – especially with models like the Aygo and Yaris – and it’s great that we can now continue that momentum into the new year.”

The Toyota spokesman said that the brand had so far sold over 3,000 new, low emission vehicles as part of its scrappage scheme, which offer discounts of up to £4,000 off certain models.

The tally makes it the second most popular scrappage option, with Ford having claimed over 8,000 sales through its scheme.

All Toyota models are included in its scheme, with the largest £4,000 discount attracted to the Land Cruiser premium 4x4, despite its diesel-only engine option.

Toyota said in a statement at the launch of the scheme on September 1 that it was in-line with its emissions reducing strategy, however.

The Toyota Environmental Challenge 2050 has seen the brand target a 90% reduction on 2010 emission levels from all its new cars within the next 33 years.

Paul Van der Burgh, Toyota GB president and managing director, said: “Our scrappage scheme is a win-win solution. Motorists can dispose of their older vehicles and have access to our cleaner, more efficient model range.

“Our world-leading petrol-electric hybrids will be an ideal choice, helping make a genuine contribution to protecting air quality – a crucial concern for today’s customers.

“What’s more, everyone who takes up our scrappage scheme can be assured their vehicle will be disposed of in an environmentally responsible fashion that maximises recycling opportunities.”