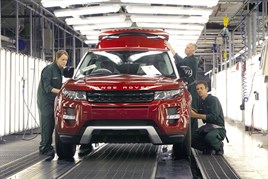 Jaguar Land Rover is preparing to scale back production of its Discovery Sport and Evoque models at Halewood manufacturing plant – blaming faltering consumer confidence in the UK.

The brand said in a statement that, despite a seventh successive year of record growth, it would be reducing production levels at the facility on the outskirts of Liverpool towards the end of Q2 as the automotive industry continues to face “a range of challenges which are adversely affecting consumer confidence”.

JLR cited ongoing uncertainty surrounding Brexit is being felt by customers at home and in Europe – where the brand sells around 45% of total UK production – as well as concerns around the future of petrol and diesel engines and general global economic and political uncertainty for the changes.

“Following a review of planned volumes we are planning to make some temporary adjustments to the production schedule at Halewood in Q2. These changes have been communicated to our workforce.”

A spokesman for Jaguar Land Rover, which has production facilities in Slovakia as well as emerging markets India, China and Brazil, said that the production cuts at Halewood would not affect lead times for Land Rover Discovery Sport and Range Rover Evoque models in the UK.

The brand’s biggest growth during 2018, meanwhile, is expected to come courtesy of its compact E-Pace SUV, a vehicle which will be built outside the UK at Magna Steyr’s car production facility in Austria.

The brand’s first EV, the E-Pac-based I-Pace, will also be manufactured in the Magna Steyr plant.