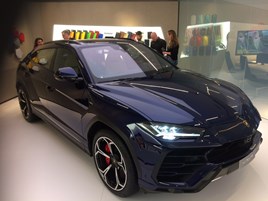 Lamborghini is preparing to roll out its first approved used programme as parts of plans to prepare its UK car dealers for a doubling of sales volumes following the launch of its forthcoming Urus SUV.

Plans for the scheme come as part of a package of changes to the way the long-time supercar manufacturer operates through its UK franchised retailers, which will also usher in the offer of competitive servicing packages and increased PCP finance penetration.

Lamborghini has increased the size of its UK network to nine retailers with the addition of Cambria Automobiles as a new franchised partner at the start of the year and the brand expects dealerships to double their sales volumes with the help of the Urus. 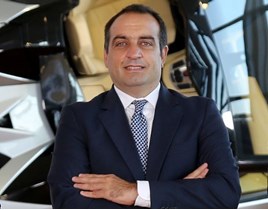 Speaking to AM at the Geneva Motor Show Federico Foschini, chief commercial officer and member of the board of management at Automobili Lamborghini, said: “Last year we sold 350 vehicles in the UK and that was a record, but we are growing really fast and that will continue with the Urus.

“With the arrival of the Urus the business case for retailers is more and more profitable. It’s clear that with our existing super sport range and the addition of a super sport SUV we are facilitating investment from retailers that are keen to invest in us.”

Foschini said that he expected UK sales to reach 600 units with the help of the Urus and told AM that the brand would be watching growth levels closely to see where there might be capacity for further franchised locations.

“We’re not pushing volume or creating problems for our dealerships,” he said. “We a realising the plans we have had to double our production to over 7,000 vehicles and double sales volume and, as our third biggest market, the UK has a big part to play in that.”

Lamborghini’s new “super sport SUV”, the Urus, promises to deliver dynamics, which Foschini claims have yet to be seen in the SUV segment.

Prices start at £165,000 for the 650PS, four-wheel-drive Urus, which is powered by a four-litre twin-turbocharged V8 engine which claims to deliver 23mpg average fuel consumption and 279g/km CO2 emissions. 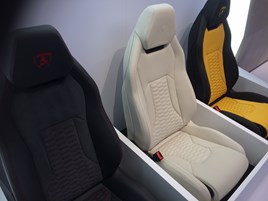 Foschini said that Lamborghini anticipates that Urus customers will spend an average of £30,000 on options for their vehicle, ahead of deliveries in Q2 and Q3 2019. Options range from a panoramic sunroof to 23-inch alloy wheels and bespoke sports seats.

But he also said that the vehicle would expose Lamborghini to a new type of customer that would be covering more miles annual and would bring a new set of demands to the brand.

Foschini said: “The Urus will bring a few changes. We will introduce an approved used programme, which we haven’t had before. There wil be quality checks and a certificate of authentication with each approved car.

“A few weeks ago we launched the Lamborghini Finance Programme and that means that we now have brand support for retail and wholesale.

“There will also be a range of service packages available for the Urus which, again, is something we haven’t had before.

“This is a vehicle which we fully expect owners to use every day and cover large mileages in, so they need to have peace of mind in terms of reliability and ongoing costs.”

The lure of more spacious, accommodating facilities will help open up the brand to a new set of customers when the Urus arrives in 2019, according to Foschini. 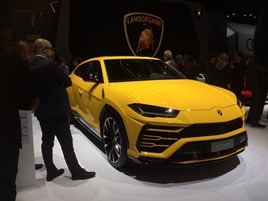 He said: “I’m very lucky working at Lamborghini. I don’t think we will have a challenge in attracting people into our showrooms to look at the Urus and consider us as a potential purchase.

“The new CI is fantastic and we aim to be accommodating to visitors. We expect to see a far wider range of customers entering our dealerships thanks to the introduction of the Urus, and that can only be a good thing.”