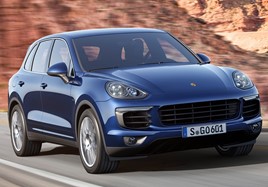 Porsche looks set to recall more than 60,000 diesel-engined Cayenne and Macan SUVs across Europe, after intervention from Germany’s automotive regulator, the KBA.

The KBA believes the SUVs use software which could reduce emissions controls for nitrogen oxides in a way that it deems is illegal.

It includes models equipped with Porsche’s Euro-6 compliant generation of diesels., according to a report in Germany’s Der Spiegel publication.

This latest issue over diesel emissions comes at a time when Porsche is launching its new Cayenne E-Hybrid, which has a 3.0-litre V6 petrol engine and a 100kW electric motor to speed the 2.3-tonne SUV from 0-62mph in five seconds.

Capable of 14-27 miles in electric mode with a full charge, the official emissions for the E-Hybrid are 72g/km, which makes it free of London’s congestion charge.