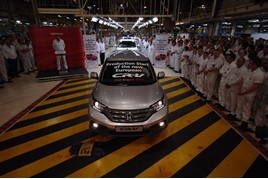 BBC News is reporting that Honda is going to close its Swindon car factory within three years.

The manufacturer will cease production at Swindon in 2022, according to the BBC's sources, but will retain its European headquarters at Bracknell.

An official announcement from Honda is due on Tuesday, the report stated.

Across the European Union, Honda new car registrations in 2018 totalled 135,000 units, according to JATO.

Globally Honda's sales amount to around 5 million cars, of which around a third are in the USA market.

Honda's Swindon plant is its only factory within the European Union. The site was chosen by Honda in 1985, to help it compete within the EU, and engine production started in 1989 but the first car built at the plant was the Accord in 1992, followed by the Civic in 1994.

Pro-Brexit North Swindon MP Justin Tomlinson said he has spoken with Honda and the UK's business secretary Greg Clark and learned this decision is based on global market trends and not Brexit.

He said the UK Government, Honda and unions will work together and a taskforce will be established to support the affected staff amid the plant's 3,500-strong workforce.

Tomlinson said: "Honda will be consulting with all staff and there is not expected to be any job losses, or changes in production, until 2021."