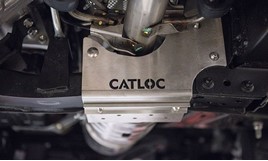 Toyota has highlighted the extra protection hybrid car owners can take to combat a rapid rise in catalytic converter thefts.

It comes after the Metropolitan Police recorded a 73% rise in the thefts during the first half of 2019 in London, according to a report by the BBC.

Toyota has published advice for customers concerned about the crime and the Toyota dealer network can provide and fit a ‘Catloc’ device for £200-£250 depending on the model, which will make theft more difficult.

And Toyota GB said it has dropped the prices of replacement catalytic converters to a level where it does not profit from supplying them to customers.

“We’re doing all we can, but clearly these are criminal operations and our scope is therefore limited,” said the carmaker.

Rocketing values of the precious metals used in catalytic converters are driving criminals’ interest, particularly in hybrid cars where the devices get used less often due to the vehicle partly using electric power, stated the BBC report.

However the BMRA warned that a lack of enforcement of the legal requirement for scrap dealers to be licenced means there are yards that operate illegally and pay cash for stolen material.

Theft of catalytic converters is nothing new, however as values of materials rise it becomes more popular for criminal gangs.