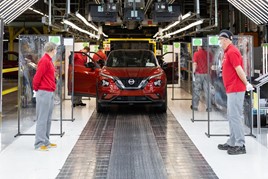 Nissan has resumed vehicle production at its Sunderland plant after a three month pause due to the Coronavirus pandemic.

A new Nissan Juke was the first car to roll off the line, following hundreds of hours of preparation to ensure the safe return of employees.

Alan Johnson, Nissan vice president for manufacturing in the UK, said: “It's great to see cars rolling off the line at the plant again, including the new Nissan Juke.

“It's a testament to the skill and dedication of the team here that we have been able to get back up and running again, with a full set of safety measures in place.”

The future of the Sunderland plant remains uncertain despite suggestions that Nissan could accommodate production of Renault’s Captur and Kadjar SUVs as part of a shake-up of its European car manufacturing operations.

Nissan stated it would close its Barcelona plant and consolidate its European manufacturing operations in Sunderland, as part of cost-saving measures designed to achieve a 5% profit margin within four years following losses on £300m.

But, less than a month later it warned that its UK car manufacturing plant in Sunderland may prove “unsustainable” if Brexit brings an end to the current tariff-free access to the EU.

The Japanese company's global chief operating head, Ashwani Gupta, also told the BBC that any plans for Alliance partner Renault to take up spare capacity at the plant – the UK’s largest car manufacturing facility – would be a matter for the French carmaker.

Improved safety measures at Sunderland include new separation between operators, such as screens, barriers and dividers, as well as one way systems across the site.

Rest areas have been redesigned and break times rescheduled to support social distancing and remove common touchpoints. Staff will be provided with all the necessary PPE they need to operate safely.

With cars due to be shipped to customers across Europe, new health and safety measures have been introduced across the dealer network in line with government recommendations. These include guidance on social distancing procedures, additional safety equipment and hygiene regulations.