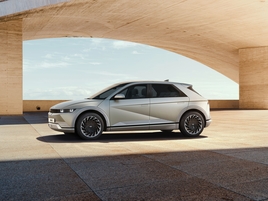 Hyundai’s new Ioniq 5 electric car has received a record number of enquires for the brand, following its unveil on February 23.

The car’s premiere was followed by 236,000 expressions of interest from European customers, while the limited-edition Project 45 version was almost three times over-subscribed within 24 hours.

It will be the first model to be marketed under the Ioniq sub-brand.

“With its ultra-fast charging, long range and customisable interior space, the IONIQ 5 is a game-changer that sets the benchmark in its class – and these outstanding characteristics have immediately proved to be attractive to significant numbers of European customers.”

The new car is built on Hyundai’s dedicated battery electric vehicle (BEV) architecture called Electric-Global Modular Platform (E-GMP) and is available with 58kWh or 72.6kWh drivetrain options and with a rear motor only or with both front and rear motors and all-wheel-drive.

The new model will arrive in Hyundai’s UK franchised dealership in the middle of this year.

When equipped with two-wheel drive (2WD) and 72.6 kWh battery, Ioniq 5’s maximum driving range on a single charge will be around 300 miles, the brand said.

Following the launch of the Ioniq 5, Hyundai will introduce the Ioniq 6 saloon in 2022 and the Ioniq 7 SUV in early 2024.