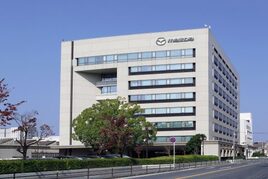 Mazda will introduce hybrid, plug-in hybrid and fully electric models to its line-up by 2025.

Currently the car maker only offers one electric model, the MX-30. The rest of its range is powered by petrol and diesel engines, some of which feature mild-hybrid technology.

A range-extender version of the MX-30, which uses a small petrol engine to recharge the battery, is expected to arrive in 2022.

By 2030, Mazda expects that a quarter of its products will be fully electric, and all other models will be electrified in some form.

Between 2022 and 2025, it will introduce a range of new products including five hybrid models, five plug-in hybrid models and three EV models. Further details on these new products will be announced in the future.

The Japanese brand says it remains committed to reducing CO2 emissions from each and every car and believes that all powertrain options available must be used to achieve climate neutrality.

Mazda is investing in different projects and partnerships to promote the development and use of renewable fuels in cars. In Japan, it is involved in several joint research projects and studies to promote the wide-spread adoption of biofuels. In Europe, Mazda joined the eFuel Alliance in February 2021 as the first OEM.