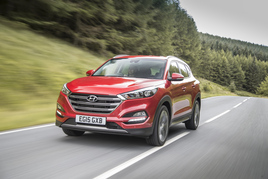 The Hyundai Tucson has won the 2022 AM Award for Used Car of the Year, voted for by AM readers, beating rivals including the Vauxhall Corsa, Ford Fiesta and Kia Sportage.

The Tucson was re-launched in 2015 as a sharp looking, family-friendly SUV, giving Hyundai a much-needed competitor in the growing compact crossover segment.

It quickly became Hyundai’s most popular model and has continued to be the brand’s best-selling car.

The Tucson resonates well with used car buyers as it proved reliable and robust. Equipment levels are generous, with all cars featuring DAB radio and air conditioning and many equipped with premium-car features like keyless entry and heated seats.

A five-star safety rating from Euro NCAP cements the car’s appeal among family buyers, too.

An updated Tucson was introduced in 2019, heralding the adoption of fuel-saving technology in a mild hybrid variant. The 186PS four-wheel drive 2.0 CRDi diesel provided a 7% improvement in fuel economy and reduced CO2 emissions.

The updated version came with a traffic jam assistant for automatic versions called ‘smart cruise control with stop and go’, which keeps pace with traffic and is capable of coming to a complete stop and automatically moving off again when the vehicle in front pulls away.

In 2021 the model was replaced with an all-new fourth-generation model, offered with a wide array of hybrid powertrains and enhanced driveability.