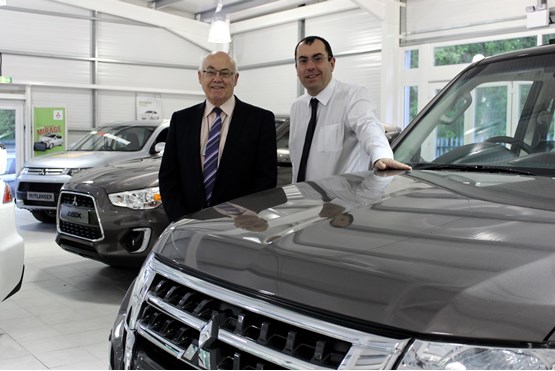 Colley Mitsubishi is set to open its new £250,000 purpose-built showroom on June 11.

The site on Maendy Way, Cwmbran is a 220 square metre building that will house up to eight cars in a spacious covered setting. The finishing touches are being made and after five months of hard work the dealership will hold a grand opening over four days, from June 11 to 14.

Proprietor John Colley (pictured, left) said: “It’s fantastic that as we celebrate the 45th anniversary of founding the business we are opening this new Mitsubishi showroom. The reason we have made this £250,000 investment in Cwmbran is because of the confidence we have in the Mitsubishi brand.

“We are very excited about the future with Mitsubishi, they have seen a dramatic increase in annual sales and we are pleased to be part of it.”

The opening of the new showroom coincides with the company’s 45th anniversary next month and Colley said the move was a sign of his confidence in the future.

Founded in June 1970 by Colley and his late brother, Colley Motor Group joined the Mitsubishi family in August 2013.

Colley said: “This is a big investment for a private firm like ours but we are delighted with the outcome. It’s great to see the new showroom and we would like to thank all our customers for their support while the building work was going on.”

AM Poll
Should the product genius role move to purely online in the future? Please leave a comment
Vote
View all
126