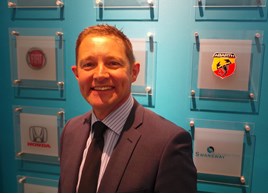 Woodhead began his career as a technician and progressed through all the dealership roles to dealer principal, before joining Volkswagen Group UK where he worked for 18 years.

He is also a three time world champion in superbike sidecar racing, among many other European and British titles.

Swansway group director Peter Smyth said: “Woodhead is an extremely impressive guy, the depth of his knowledge within both dealerships and the Volkswagen group brands makes him a valuable asset, whilst his commitment to doing whatever he does, to the best of his ability is beyond question.

“This new role is vital to the group in maximising the aftersales opportunities and we are delighted to welcome Paul on board; he is the embodiment of our caring, honest and proud values”.

Woodhead is married with two young sons and, though he retired from World Superbikes at the end of 2005, he still likes to keep his hand in by riding at special events such as the Goodwood Festival of Speed.