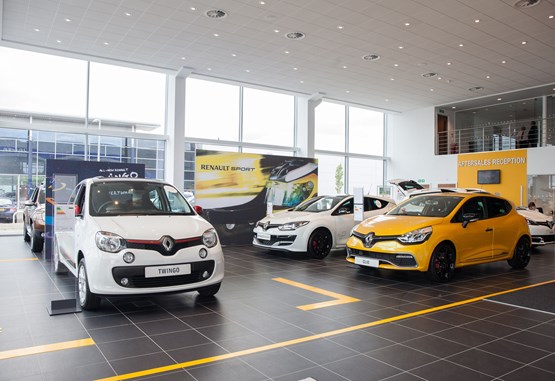 Car dealer Motorline Group has invested £3.5 million in a Renault and Dacia ‘flagship’ store in Kent.

The group has redeveloped its existing site in Bircholt Road, Maidstone.

Gary Obee (pictured), managing director of Motorline Renault, said: “Both Renault and Dacia are brands on the rise with outstanding consumer appeal and model line-ups that are getting stronger and stronger.  We are extremely pleased with the new showroom. It’s an inviting and engaging place and it looks fantastic.

“As a group we strive to have the best dealerships in the country. We have high standards for our facilities and the people we employ and we are pleased to have delivered such an impressive facility for the people of this area.”

Motorline also operates Renault and Dacia franchises in nearby Ashford and Canterbury.

Darren Payne, sales director at Renault Group UK, said: “The new showroom is an amazing facility and ensures our customers in the area will enjoy an overall experience that’s more than a match for anything they’ll find elsewhere.”

Renault Group sales – comprising of Renault cars, vans and Dacia – were up 15.2% to 62,476 vehicles in the first six months of 2015 according to the latest SMMT figures.

In the last 12 months the Renault and Dacia franchise has been taken on by 13 new dealers, helping Renault Group in the UK meet the objectives set out in its GO5+ strategy for sustainable growth.

GO5+ is Renault Group’s UK five-year plan, started in June 2013, with a goal to deliver more than 5% group market share in 2017 along with top-tier network profitability above industry average, top 10 ranking in the JD Power Customer Satisfaction Survey and a top 10 Global Opinion rank for the Renault brand.

Established in 1972, Motorline joined the Renault Group in 1993. The new Maidstone showroom is part of a larger development that has seen the Bircholt Road area, in Parkwood, transformed to make it a motor trade destination, with many of Motorline’s other franchises nearby.

Employing 22 people, it is one of the first in the country to offer the Renault Store retail concept, which sees the showroom divided into themed zones and features interactive displays to improve the overall customer experience.