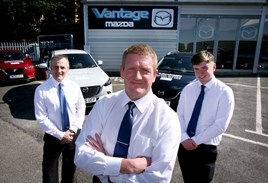 Vantage Motor Group has been appointed as the official Mazda dealer for Oldham with plans to build a new site, boosting its turnover by £8 million.

The move sees Mazda join Toyota, Kia, Citroen, Honda, Hyundai, Skoda and Lexus in Vantage's portfolio and comes after the addition of the group’s first Skoda site in Morecambe.

Vantage has opened a temporary showroom on the same site as Vantage Hyundai Oldham on Rochdale Road, and plans to build a Mazda dealership later this year, representing an investment of £500,000.

The dealership which will be branded as Vantage Mazda Oldham will create 10 jobs in the local area, and is expected to sell 500 new and used cars per year.

Vantage welcomes the addition of the Mazda brand as part of its commitment to establishing new relationships with manufacturers who share its ambition for growth.

Vantage Managing Director, Mark Robinson said: “We are very excited about adding Mazda to the brands we are proud to represent, and it couldn't come at a better time as Mazda continues to evolve by adding fantastic new products like the Mazda2 and CX-3, and the all-new MX-5 which is set to join the line-up soon."

Vantage Mazda Oldham is situated just off the A627.

Vantage Motor Group was founded in Harrogate, North Yorkshire in 2003.

It now has 22 dealerships across Northern England and the West Midlands representing Toyota, Kia, Citroen, Honda, Hyundai, Skoda, and Lexus.