Car dealer Marshall Motors has reported record interim figures for the six months to June 30 for revenue and profit as it plans digital enhancements to the business and property investment.

Gross margin at 44.8% has also seen a significant improvement, up from 43.2% in the same period last year partly due to "workshop efficiency and productivity improvements".

And he was confident the company was not simply riding the wave of the strong and long period of new car market growth.

“In July SMMT stats revealed a more normalised growth, whereas to the half year it was up 7%,” he said. “New car growth is driven by events at a macro level involving international markets. So, China’s new car market is down 7%, Brazil down 21% and Russia down a third and manufacturers are seeing the UK as a great place to do business, particularly due to the strength of sterling.

“They’re putting out strong consumer offers – low rate PCP offers with low or zero deposit requirements – so consumers effectively rent their cars. I’m optimistic we will see continued new car growth, if not to the same growth rates we’ve seen in recent years, but still a 2.5m-2.6m market this year. PCP customers will need to renew their contracts and we will exploit these opportunities as well as those the new car market presents in used cars and aftersales.”

Marshall completed an IPO in April. It has £39.9m in cash reserves, which Gupta said would be spent on  “investing in the business”, in particular three property developments: a new Audi 17-car showroom centre in Exeter and Jaguar Land Rover businesses in Cambridge and Ipswich. It is part of the reorganisation of the JLR Suffolk market area and the relocation of the group’s existing Halesworth Land Rover and Ipswich Jaguar dealerships to a new site.

The three sites are expected to be open for business in the second half of 2016.

Another project in motion include the development of a new website for launch in the first quarter of 2016, which will be fully responsive and has been prompted by the growth in visits from mobile devices to the point where it exceeds traffic from desktop computers. Overall visitor numbers in 2008 was 750,000 and its forecast to be around three million this year on a 15% year-on-year in the first half of this year.

Ahead of this Marshall will roll-out an iPad tablet-based enquiry management system for showroom staff, aimed at getting them out from behind their desks and improving customer experience.

August 2014: entire issued share capital of CMG 2007 Limited, which operates BMW and Mini dealerships in Scunthorpe and Grimsby and Nissan dealerships in Boston, Grantham and Lincoln. 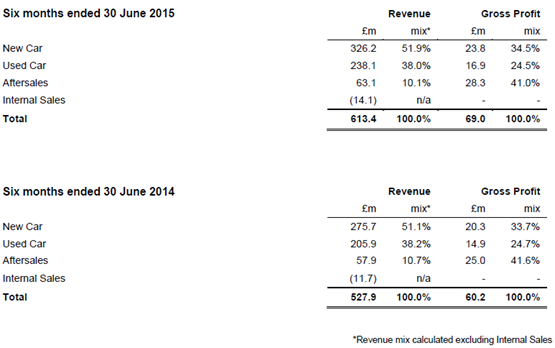 AM Poll
Has the UK motor retail industry handled the coronavirus lockdown well? Please leave a comment.
Vote
View all
96