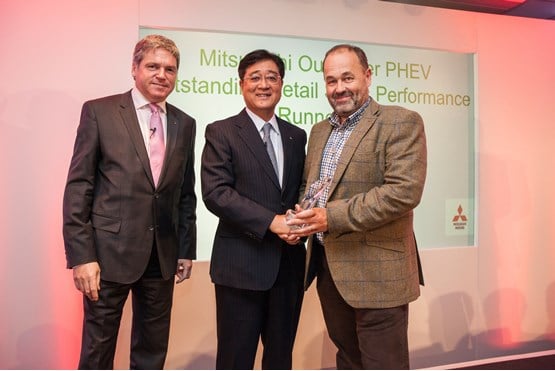 Mitsubishi has awarded three of its UK dealerships Outstanding Achievement awards in recognition of their sales success with the Outlander PHEV.

Humphries and Parks Mitsubishi in West Malling, Kent, won the award for the most retail sales, while Luscombe Mitsubishi in Leeds was named runner-up.

Holdcroft Mitsubishi in Stoke-on-Trent won the award for the most fleet sales, with Cheltenham and Gloucester Mitsubishi being named runner-up.

The awards, for sales of the Outlander PHEV, were presented by the chairman and chief executive of Mitsubishi Motors Corporation (MMC), Osamu Masuko, and Lance Bradley, managing director of Mitsubishi Motors in the UK, at a meeting for the entire dealer network at Cheltenham Racecourse.

The UK is the biggest market in the world for the Outlander PHEV, which was launched in 2014.

Humphries and Parks takes this latest award in addition to being named New Dealer of the Year at Mitsubishi’s annual conference in March and being crowned the Most Improved Company of the Year in the 2015 AM Awards.

Holdcroft Mitsubishi, adds its Mitsubishi fleet award to its win as Fleet Dealer of the Year at the 2015 Fleet News Awards in March.

The Outlander PHEV has achieved 14,000 sales from launch and currently accounts for around half of all plug-in car grant applications.