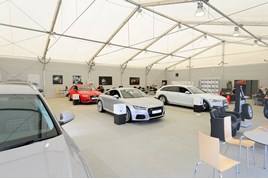 Lookers Stirling Audi used a large temporary showroom during the busy plate-change of month of September to maintain sales as its main showroom was being expanded.

Buildings specialist Spaciotempo supplied and installed a temporary showroom, which also houses a reception area along with sales offices, toilets and a canteen, was erected in just eight days – giving the dealership time to prepare for the month when new ‘65’ number plates became available.

It will remain on site for another five months while the company’s permanent showroom is redeveloped.

Stephen Marchetti, head of business at Stirling Audi, said: “Our main showroom is being replaced as part of our expansion plan and we needed a substantial temporary solution until the building work is completed.

“We wanted to be in for September but were very late in getting something organised, so Spaciotempo pulled us out of a hole.

“They reacted extremely quickly to our brief. The showroom was up and running just three weeks after my initial phone call and the installation itself took just eight days.

“I believe projects like this usually take between six and eight weeks, but they turned the order around in half that time, which was phenomenal.”