Dealer profits down £1,000 in September and pre-reg trend continues

The average UK motor retailer made an  average of £73,200 during the plate change month of September, according to the latest ASE figures.

This practically matched the performance in September 2014 when dealers made £74,200.

The profit level slipped slightly year-on-year from 1.5% return on sales to 1.3% in the month.

Overall dealership profit levels have slipped slightly for each of the past fourmonths with rolling 12 month profit per site to £207,500.

September saw increases in both new and used car sales compared to the prior year. ASE figures show dealer new car sales were up 5% in the month, bringing the year to date figure back within touching distance of the prior year sales figure.

“While the increase in self registrations does not appear as marked as in some months earlier in the year, given the size of the September market the number of units remains significant.

“We also see the  impact of changes to bonus levels and self registration provisions when the large increase in registrations in Q3 does not lead to an increase in profit compared to 2014.”

Used car sales continued to rise in September, showing a 7.4% increase on the prior year.

Margins remained strong in the month at 12% with no sign, yet, of distressed selling of self registered vehicles, according to ASE.

Jones said: “Used car return on investment did fall in the month as a result of a rise in used vehicle stock levels and we wait to see how profitably these vehicles are disposed of.

“As expected overhead absorption has continued to slide towards 50%, with improvements in aftersales performance unable to keep up with rising facility overheads.

“This is expected to continue as we go through the year and into 2016, with meaningful aftersales income increases from the current level of registrations taking time to feed through.” 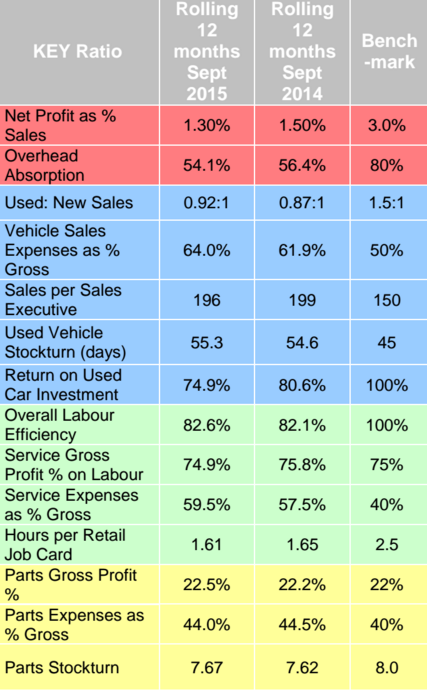