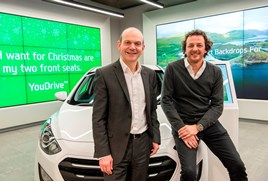 Hyundai has opened its second “revolutionary” car retail store as part of a partnership with digital retail specialist Rockar.

The doors were opened at the new 250 square metre site at the Stratford’s Westfield shopping centre as the partnership attempts to follow on from the success of the store at Bluewater, Kent, which has attracted 163,000 visitors in the past 12 months.

Staffed by a team of 18 brand ‘Angels’ the venture aims to tap into a new buying demographic and has already succeeded by attracting 93 per cent of customers who are new to the brand.

Speaking to AM, Hyundai UK chief executive Tony Whitehorn said: “The potential of this project is unbelievable. The success of the store at Bluewater has been impressive, but that centre attracts 27 million people a year and Westfield has a footfall closer to 44m. That’s a huge potential audience.

“For 130 years the automotive industry has been selling cars in pretty much the same way. What we are doing here is revolutionary. We are taking our cars to the people and aligning ourselves with key high street brands. There’s huge potential in this for us.”

Whitehorn and Simon Dixon, chief executive and founder of Rockar, declined to comment on the number of vehicles sold at the existing store at Bluewater, claiming that they did not want to “educate the competition”.

Whitehorn claimed that existing Hyundai dealerships were “delighted” with the new sales concept however, claiming that the new point of contact for customers could have a positive knock-on effect for traditional outlets too.

He said: “This is the way things are heading and we cannot bury our heads in the sand. This is an opportunity to be grabbed with both hands.”

Dixon said: “The success of the store at Bluewater already has us wanting to run with this project and take it to ther parts of the country. I know Tony is a little more cautious, but I’m hopeful that is something we can do.”

The biggest seller at Hyundai Rockar store has been the i10. Dixon claims that this is the result of its £130-per-month potential cost to consumers, a level of expense that could be achieved as a customer to a nearby phone retailer.

Displayed within the new store are five Hyundai models, details about which can be accessed via an array of 45 digital content screens and two browsing tables with 11 interactive 21-inch touchscreen tablets.

An additional 20 cars are available for test drive from the YouDrive centre located in the shopping centre’s car park atrium.

Rockar Hyundai at Bluewater has lured 72 per cent of its customers away from the used car market.

In addition, the purchasing model of Rockar Hyundai has also strongly resonated with women, with over 54 per cent of all buyers being female while the average age of customers is just 39 years old.