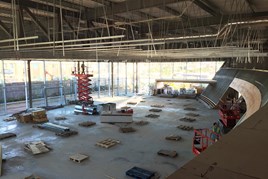 Ocean Automotive has been listed in the Top 1000 Companies to Inspire Britain after projecting a 329% rise in turnover over five years.

The Poole-based Audi and Volvo dealer group were named among ‘gazelles’, ‘the magic 6%’ and ‘scale ups’ which have had a remarkably disproportionate effect on the national economic output in the report, which is published by the London Stock Exchange.

The 2015 report is the second to identify the UK’s most exciting and dynamic SMEs which have, on average, more than doubled their revenue in the last four years and have significantly outperformed their sector peers.

David Kelly, managing director of Ocean Automotive said: “I am delighted that Ocean Automotive has been recognised by the LSE in these terms, the performance of the businesses within the group contribute towards these figures, no less than the performance of Poole Audi whose growth has constantly remained at 20% year on year, which is significantly higher than the 5% growth that Audi itself has achieved as a brand nationally.

“We expect to maintain this growth in 2016, a year that sees Poole Audi move into the UK’s largest Audi Centre, a centre designed with the next 25 years of trading in mind, and one that will see employee figures for the whole group exceed 230 when it opens its doors.”