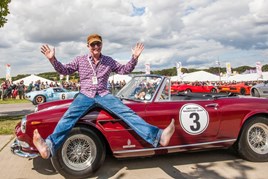 The Daily Mirror has published details said to be taken from the accounts of Zimple Limited, the used car business he set up with wife Natasha in 2012.

The Mirror reported that Chris was "pleased" with the performance over the year and is "confident of continued profitability as the company becomes more established”.

This year’s financial results for Zimple Limited are for the year ending March 31, 2015, so do not take into account the £1.3 million sales of seven of Evans’ cars at Bonhams' Goodwood Revival auction.