Victory in video competition earns dealer £3,500 worth of diagnostic equipment 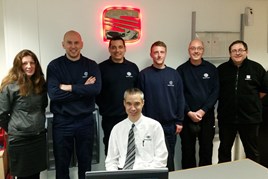 Awards success brought a warm glow to Snows Seat Southampton as the dealership was recognised for its use of an innovative new video service.

Snows emerged victorious from a Quarter Four competition, which encouraged Seat dealerships across the country to relay vehicles’ visual health checks to customers using video, by attracting a total of 510 video views, almost 150 views ahead of second place.

The dealership’s success saw it awarded with brand new diagnostics equipment worth in excess of £3,500.

At Snows, a written record of every visual health check is provided for the benefit of customers, highlighting areas of concern as well as those which are acceptable or advisory.  But the additional SEATNow videos can help highlight any issues thrown up by the health check.

Snows Group board director Neil McCue said: “We were delighted to hear that Snows Seat Southampton were the winners of Seat’s award.

“We look forward to the new equipment arriving and we are very proud of everyone who made this happen.’