Pendragon ordered to pay £85,000 after supplying customer's dream car order to someone else 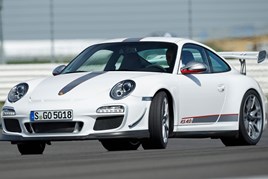 Pendragon has been ordered to pay £35,000 in damages and the £50,000 legal fees of a customer who ordered a Porsche GT3 RS 4.0 only to see his dream car supplied to someone else.

The Porsche Centre Bolton had taken a £10,000 deposit from classic car repair shop owner Kevin Hughes, who had delved into his pension pot to secure the vehicle in March 2011.

But when the 67-year-old’s limited-run Porsche – one of just 30 brought to the UK – arrived in stock, it was sold to another customer, the Manchester Evening News reported.

This week three of the country’s most senior judges, sitting with Lord Justice Richards and Lady Justice Macur, at London's Appeal Court, ruled the company must pay for its behaviour, stating that it was “as plain as a pikestaff” that there was a binding contract between Hughes and the dealership.

The £35,000 in damages awarded to Hughes was said to reflect the difference between what the pensioner would probably have paid for one of the cars – £135,000 – and its value to a collector.

Pendragon Sabre were also ordered to pay £50,000 towards Hughes’ legal fees, but that bill is expected to rise.

Hughes' claim was previously rejected by District Judge Knifeton at Preston County Court, who found that there was no contract agreed between the dealership and Mr Hughes.

The judge found then there had merely been "an expression of interest by Mr Hughes" about the car — and he had suffered no loss by not buying it. Hughes took the case to the Appeal Court.