SERE Ltd of Belfast named SsangYong Dealer of the Year 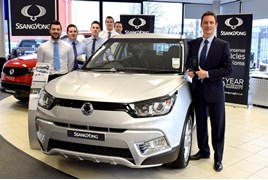 SERE Ltd of Belfast has been named SsangYong Dealer of the Year – less than 18 months after taking the franchise on.

Presented with their award at a gala dinner held on board the Royal Yacht Britannia in Edinburgh, the dealership – which became a SsangYong franchise in September 2014 – was congratulated on selling more cars than any other in the brand’s dealer network.

Paul Williams, CEO of SsangYong Motor UK said: “Sincere congratulations to everyone at SERE: sales, aftersales and management. This is a great achievement, and a beacon to all our dealers to demonstrate what can be achieved.”

Stanley Edgar, managing director of SERE Ltd, which is based in Boucher Road, Belfast, said: “We are naturally delighted. This is a great accolade for the whole team who have worked so hard.

“Getting a new franchise bedded into a dealership inevitably takes some time and effort.  Everyone has pulled together and the results we have achieved with SsangYong in just over a year are a credit to them all.”

SERE general manager, Bernard McCotter who accepted the award, added: “The SsangYong franchise has done extremely well since we launched just over a year ago.

“We are very pleased to have received the Dealer of the Year award and are confident the franchise will continue to go from strength-to-strength.”