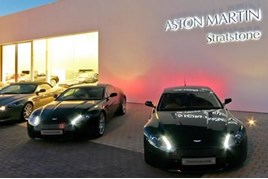 High-flying Aston Martin dealerships in Wilmslow and Mayfair have been named as the world’s most successful outlets for the iconic British brand.

The pair of Stratstone facilities have been ranked first and second among the best-selling Aston Martin dealerships across the globe in 2015.

Christian Marti, Global Sales Director at Aston Martin, said, “This is a great achievement for Aston Martin Wilmslow and Aston Martin Mayfair. The Stratstone group of dealerships form a vital part of our Global Dealer Network.”

“Stratstone has a real connection with Aston Martin and its rich heritage, and we’re proud to continue flying the flag for such a prestigious British brand.”

A cash injection of £500 million during 2015 and an engine partnership with Mercedes Benz are central to the brand’s drive to return to the 7,000 global sales mark it has not achieved for a decade.

This summer a new Aston Martin dealership will be opened by Dick Lovett in Bristol.

Aston Martin Bristol will be based in a 27,000sq-ft showroom in Cribbs Causeway, near the M5 motorway.