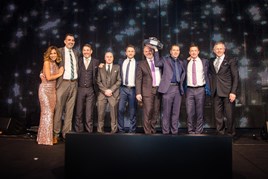 Sinclair Group has been named as Mercedes-Benz Cars’ Retailer of the Year at the annual Mercedes-Benz Retailer Awards due to "hard work and dedication" said the brand's UK CEO Gary Savage.

The tireless efforts of its management team and an all-embracing approach that ensures every area of the business receives the same highly-focused attention and clear direction were cited as reasons for the South Wales-based group’s win.

Gary Savage, CEO Mercedes-Benz UK, said: “Sinclair Group has had an outstanding year. We tried to think of the one thing that Sinclair Group does that others don’t, but it’s not one thing, it’s everything.”

Representative from the Sinclair Group, which has outlets in Cardiff, Swansea, Bridgend and Neyland, received their award at a London event hosted by TV presenter and singer Myleen Klass last week.

Savage put Sinclair Group’s success down to “hard work and dedication across the company”.

He added: “It’s a family business that’s proud to be part of the Mercedes-Benz family, and which embodies the values we encourage throughout the Mercedes-Benz Retailer Network. Every employee plays their part in delivering a positive, efficient and friendly service.”

The smart Retailer of the Year was also named at the Mercedes-Benz awards, with Sytner West winning.

Gary Savage said: “Sytner West managed to encapsulate the fun of the smart brand in a professional and customer-friendly way, making buying and owning a smart as enjoyable as driving one.”

At last week’s AM Awards event Mercedes-Benz scooped Manufacturer of the Year and CEO Gary Savage claimed the Business Leader of the Year title.

The successes followed another record year for the German premium brand, which recorded sales growth of 17% in 2015.