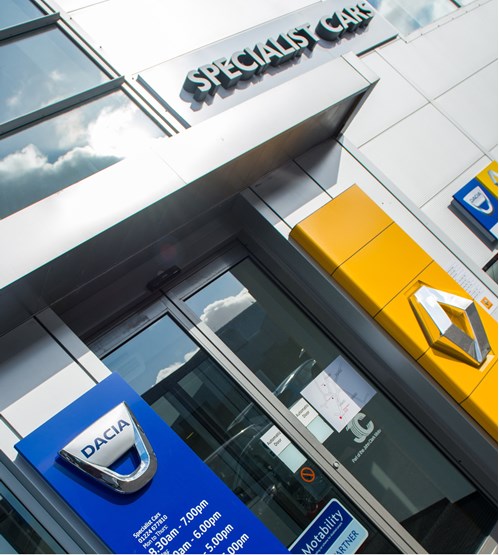 Renault is again represented in Aberdeen after a three year absence.

Located on Abbotswell Road and launched under the Specialist Cars arm of John Clark, the development of the dealership also means value brand Dacia brand has a presence in the city for first time.

The site is also the first Renault Group franchise to be opened by John Clark in its 37-year history.

John Clark has invested more than £150,000 in refurbishing the site, which features a virtual car configurator and the iPad-equipped ‘brand bar’.

The building was previously a home to an Audi dealership, which John Clark relocated to a £9m showroom last October. A Peugeot dealership has been launched in the former Audi Approved Used showroom.

It already has a 17-bay workshop, which includes dedicated bays for MoT testing and wheel alignment.

The opening of the dealership has created 28 jobs.

The appointment of a further 15 Renault dealers are expected this year.

Chris Clark, director of John Clark, said: “The addition of Renault and Dacia to our portfolio allows us to cover areas of the market that we do not currently represent.

“With Dacia vehicles starting from only £5,995, this brand in particular presents us with a true opportunity to target car buyers that have yet to experience John Clark.

“Our decision to invest in the Renault Group franchise was influenced by a number of factors, including the significant growth in market share its vehicles have achieved over the last three years and the strength of its product ranges.

“Establishing the dealership has been an excellent experience. We have found the manufacturer’s franchise team to be very dedicated and passionate, their expertise having enabled us to launch the business in record time and making the transition to representing a new franchise exceptionally easy.”

Darren Payne, sales director for Renault Group UK, said: “With John Clark already enjoying a sizeable presence across Scotland and having established an excellent reputation over the best part of 40 years, we’re delighted to welcome such a valuable addition to our dealer network.

“Renault Group has been without representation in Aberdeen for some time and with its immense experience and customer focus, John Clark is the perfect investor to firmly re-establish Renault in the city and introduce the region’s car buyers to the great value of Dacia.”