Mitsubishi recognises dealerships at Dealer of the Year Awards 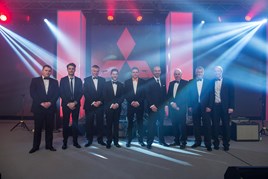 Devonshire Motors and Firs Garage have shared top honours at Mitsubishi’s Dealer of the Year awards, with Tees Valley Mitsubishi in Darlington taking the runner-up spot.

It was the third year in a row that Firs Garage, of Hook Norton, Oxfordshire, was awarded the title and the second consecutive year that Barnstaple-based Devonshire Motors was honoured at the manufacturer’s annual event.

Formula One legend Nigel Mansell’s family-run dealership, The Mansell Collection in Jersey, was named New Dealer of the Year, meanwhile, with Premier Mitsubishi in Rochdale and Hyde and Batchelors of Ripon both being named as runners-up in that category.

The black-tie awards were held as part of Mitsubishi Motors’ annual conference for its UK dealers, which took place at Celtic Manor Resort in Wales.

Lance Bradley, Managing Director of Mitsubishi Motors in the UK, said: “All these dealerships should be extremely proud of their awards.

“We have an excellent dealer network and all those who received an award are shining beacons for the Mitsubishi brand. I’m delighted that they’re getting this recognition, which they richly deserve. My congratulations to them all.”

Devonshire Motors’ success at the Mitsubishi awards event come a month after the dealership claimed the Excellence in Customer Service accolade at this year’s AM Awards.

Mitsubishi Motors is seeing a strong and sustained period of growth.

Statistics from the Society of Motor Manufacturers and Traders show Mitsubishi Motors in the UK has been the fastest-growing mainstream car manufacturer for the past three years.

The company saw sales growth in passenger cars of 44%t in 2015 compared with the previous year, against an overall market up by 6%.