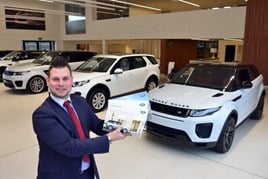 Shukers has opened its new £3.5m Land Rover showroom in Ludlow just over a month after announcing the sale of its Shrewsbury site to Hatfields.

The family-owned business sold its Shrewsbury dealership to concentrate on creating the new Land Rover centre to cover south Shropshire and the Marches.

Conforming to JLR’s new ‘ARCH’ corporate identity – being introduced to all dealerships by the end of 2018 – the new facility on Parys Road is 200 yards away from the business’ previous site.

Shukers Land Rover’s head of business, Joe Barney, said: “Shukers Land Rover has consistently been voted in the top ten of UK dealerships for customer service and the team we have here in Ludlow is very keen to maintain those high standards for both current and new customers alike.

“Our previous Land Rover premises opened in 1991 and had a turnover of £8 million at that time, but as the Land Rover product range has expanded and through consistent investment, strong customer loyalty and business achievement we have grown to a turnover of £20 million per annum.”

Barney said that 25 staff are employed at the new facility, up from eight when the business opened in 1991.

According to AM’s AMi database Shukers now has eight franchised dealerships, including the Subaru, Isuzu, SsangYong and Great Wall brands.