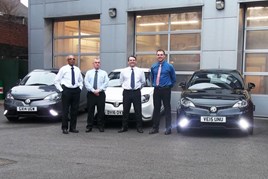 The family-run, Wolverhampton-based operation is owned by Aaron Bunning and his grandfather, Dennis, and was established in 1967.

Speaking about the prospect of operating a franchised dealership for the first time, Bunning said: “We are really looking forward to representing a British brand that is so recognised. Once we heard everything about MG and got to know the brand and its customers more, we knew we wanted to work with a manufacturer that is only going to continue to grow more and more.”

An MG spokesman revealed that the Bunning operation stood out as a community-based business through its work with The Way Youth Zone.

A place for eight to 25-year-olds to spend their time and get off the streets, the business raised £400 for the cause in 2015 and will be inviting users to a grand opening of its MG operation later this month.

Bunning is also a stand-out operation among the area’s petrol heads, MG revealed.

Bunning said: “We run a monthly track day for our customers to let them play around in their cars, gain driving guidance and expertise from professionals as well as having a fun day out.”

Matthew Cheyne, head of sales and marketing for MG, said: “It’s fantastic to be welcoming Aaron and his team to the MG dealer network. It’s always great when we find a dealer that does something a little bit different to engage its customers and attract more. We’re really looking forward to working with Bunning and the passion they bring.”