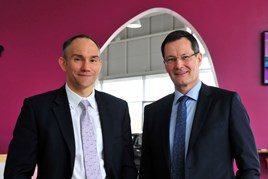 The Car People are preparing to complete the tendering process for a new car supermarket in Warrington – its largest facility to date.

With the Wakefield-based business’s West Yorkshire site undergoing an expansion from eight and a half to 12 acres – increasing capacity to over 800 cars – and its Sheffield and Ashton sites also experiencing growth, the business is expanding into Cheshire.

The 12 and a half acre site will display 1,000 cars when completed, with a total capacity of 1,700 vehicles, The Car People’s managing director Martyn Carnell said, adding that the facility would be open before the end of the year.

Speaking to AM, Carnell added: “We currently have the Warrington plans out for tender and we’re hoping to move fairly fast to get spades in the ground, hopefully getting things underway at the beginning of May.”

The Car People’s director of sales, Jonathan Allbones, said: “In the past year we have sold over 17,500 cars. Year-on-year we are about 7% up on volume, following a 5% rise a year earlier. Our Wakefield site is operating at capacity, we are experiencing impressive growth at Sheffield and Ashton is also on the rise.

“The timing is right for us to move into new areas. It’s an exciting time for us.”

The Car People’s expansion comes 16 years after the business was first established with aspirations of operating through six sites by the end of 2005.

Allbones said that the business is on the up and is looking forwards to a positive year ahead. He said: “What people will see in the coming year from The Car People is quite an aggressive period of growth. It’s something I’m looking forward to.”

Carnell added: “I’m really excited about the potential of the new site.”