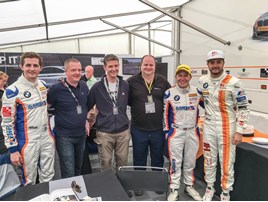 JCT600 took advantage of its links with the British Touring Car Championships by hosting customers of its Vehicle Leasing Solutions division at the Croft racing circuit.

The group invited key customers to enjoy a VIP day at the sixth British Touring Car Championship (BTCC) race of the season where Sam Tordoff – son of JCT600 chief executive John Tordoff – was in action with the JCT600-sponsored GardX team.

JCT600 customer, Russell Cook from Kaefer, said: “We particularly enjoyed watching the race with the pit mechanics and meeting the BMW drivers for a Q&A session, which was really fascinating, especially since all the drivers raced brilliantly on the day.

“Sam had made it to pole position for his next race, Rob Collard had won his previous race and Jack Goff had set the fastest lap, so they were all in really good spirits.”

Sam Tordoff still works at his family’s Bradford-based JCT600 car retailer business and is following in the footsteps of his rally driving grandfather Jack Tordoff, who competed professionally in the 1960s and ‘70s.

Paul Walters, sales director at JCT600 Vehicle Leasing Solutions, added: “This was a fantastic opportunity for our customers to join us in supporting Sam’s BTCC journey on his home track in North Yorkshire. After topping the driver rankings at the weekend, he looks set to have a great season.”

He added: “We plan to host another VIP customer day at Rockingham, Europe’s fastest racing circuit, in August, and judging by the positive reaction from our customers this time, it looks set to be a regular event for us.”

AM Poll
How soon will your business recover after the Coronavirus threat is over? (Please leave a comment)
Vote
View all
259