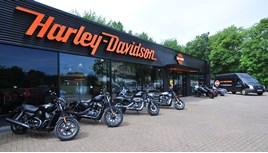 Jennings Motor Group has added 12 new jobs and a new business venture with the official opening of its new Gateshead Harley Davidson dealership.

Following on from the group’s acquisition of the Leeds Harley Davidson franchise, the all new facility on Ellison Road, Eslington Park, adds to a portfolio which already features Ford, Kia, Mazda, Seat, Mitsubishi franchises.

Paul Mundy, dealer development manager for Harley-Davidson, said: “We are delighted to announce the opening of the new Harley-Davidson store in Gateshead with the Jennings team.

“Jennings has the same customer philosophy as Harley-Davidson.  They have been in business for more than 100 years and in that time, have become synonymous with the highest standards of customer care in the North East.”

Sohail Khan, director of Jennings Motor Group, has been responsible for overseeing the project, from construction through to the recruitment process. He said: “Selling and repairing bicycles is how the original Jennings business began more than a century ago.

“The opening of our second Harley-Davidson dealership marks another significant chapter in the company’s 104-year long history.

“We are delighted to be bringing the highly prestigious Harley-Davidson brand to the people of the North East and look forward to providing an exceptional sales and aftersales service to our new customers, whom I’m sure will be impressed with the new dealership and the products and services we have on offer.”

Mundy added: “Jennings Motor Group is one of the few mid-sized companies in the motorcycle and automotive retail industry still in family ownership, meaning the business is their life not just a small part of their life.

“We are excited to be opening our second Harley-Davidson store with Sohail and his team.”