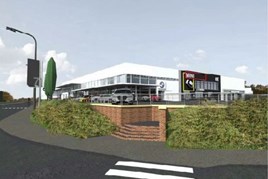 A development of a site previously occupied by Remploy, the new facility off Brightside Lane will bring together Sytner’s two franchises which are currently located on two separate sites in the city.

The new multi-floor development will feature approximately 8,600sq-m of floor space within its ground floor, mezzanine and first floors.

Developed by AT Architects Limited, plans for the new showroom make clear that it will be built to the latest BMW CI standards and will include a drive-in service area for customers.

Planning statements drawn-up by AT suggest that the facility will provide employment for 120 staff with “a number of new roles created”.

Sytner said that it was necessary to relocate its Sheffield BMW and Mini facilities to allow for growth.

A statement issued by the group said: “The current BMW business operates from a very constrained city-edge location which is functionally obsolete whilst MINI operates from a small section of the Land Rover site on Savile Street.

“Neither facility is capable of meeting the requirements of either the brand or the business operator and therefore relocation is inevitable.

“Similar issues have previously led to the development of a number of motor businesses on the axis between the City and Meadowhall including facilities for Ford, Kia, Volvo, Vauxhall, Land Rover, Porsche and Mercedes-Benz. 1.5

“The proposed development is designed to accommodate significant anticipated growth in the business.

“The BMW and MINI brands have grown in recent years but capacity constraints in the Sheffield operations have resulted in the business developing more slowly than those in other similar cities and therefore offering fewer employment opportunities in the area.

“As an example, Sytner Sheffield currently employs 144 people whilst the recently developed facility operating the same brands in Leicester employs 177 – a shortfall of c. 20%, equivalent to 33 jobs.”