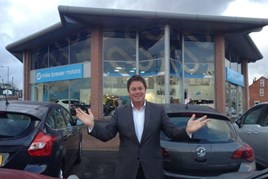 Car trader turned TV presenter Mike Brewer has opened a second branch of Mike Brewer Motors at an opening event at the £5m facility in Luton.

The Mayor of Luton, Cllr Tahir Khan, was on hand to help Brewer officially open the used car retail site, which has created 25 jobs, Bdaily reported.

Brewer’s planned UK-wide chain started up business in Sheffield back in 2012 and specialises in premium used and nearly new cars, as well as offering aftersales services such as MOTs, servicing, and accident repair.

Cllr Khan described the opening of the new site, on Leagrave Road, Luton as “fantastic news for Luton.”

Brewer added: “We’re delighted to be opening this second dealership.”

The centre was formerly a Specialist Cars' BMW dealership.