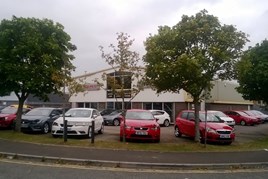 The business, in Lynx West Trading Estate in Brympton Way, will now trade at Snows Seat Yeovil and represents the Group’s inaugural site in the county of Somerset – taking Snows’ Seat representation to six.

The deal was done after the showroom’s previous owner, Richard Singleton – who established Carshop in 1990 and was awarded the Seat franchise in 1995 – announced his retirement.

McCue said: “Working in tandem with the group’s five other Seat dealerships Snows Seat Yeovil will lead the way for Snows Group in Somerset.

“We look forward to greeting the local community for what promises to be a long-lasting and rewarding relationship, and we hope that this will be the first of many Snows Group dealerships in the county.”

Snows Group now has Seat dealerships in Southampton, Poole, Portsmouth, Salisbury, Yeovil, and on the Isle of Wight.