Mercedes- Benz has received the highest score from dealers questioned on value of the franchises they hold. Citroen was voted the worst performing franchise.

The results are revealed in the latest, summer 2016 dealer attitude survey from the National Franchised Dealers Association (NFDA).

The all-important question about the overall value of the franchise shows an increase in dealer satisfaction with their manufacturers when compared to the last winter survey’s results (6.2 vs 6.1), but it has remained at the same level as last summer.

Mercedes is once again the highest scoring franchise with an average score of 9.5. This is up 0.2 points compared to the winter and slightly down from last summer’s peak (9.7).

Kia has improved by 0.8 points from last winter and is now the second placed manufacturer with 9.2 points.

Lexus has made huge progress from summer 2012 when they scored 6.7 and they are now third with an average score of 9.0 points.
Suzuki and BMW close out the top five with 8.9 and 8.1 points respectively.

“On a positive note, some manufacturers appear to have found the correct balance and are working successfully with their dealer networks.

“Looking at the current short term uncertainty and at the possible challenges ahead following the Brexit vote, it is vital that dealers and manufacturers continue to co-operate and try to strengthen their relationship to achieve positive outcomes.”

Mercedes is once again the highest performing franchise with a score of 9.5. It has held this position since the winter 2015 survey.

The current score is a little lower than last summer’s survey where it peaked at 9.7 points, an almost perfect score.

Mercedes dealers appear almost completely satisfied with their manufacturer in their overall rating.

Kia were the second placed manufacturer with a score of 9.2.

Kia has made a significant improvement in score since the winter improving by 0.8 points to 9.2.

It previously scored more than nine points back in the winter of 2014 with a score of 9.1. For the surveys since then their score has been between 8.4 and 8.6.

Third place is Lexus who have fallen one place since the winter survey even though their score has risen from 8.9 to 9.0.

Lexus have been making impressive improvements to their score for this question for some time.

In the summer of 2012 it scored just 6.7 but since then have improved their score in every survey except one (winter 2014).

Suzuki is another franchise to have improved its score but fall a place in the rankings.

In the winter it was third placed with a score of 8.8.

It is a franchise that always scores well and is often in the top five for the best scores in this questions and others in the survey.

BMW takes the final place in the top five for the overall rating question.

This franchised scored 8.1, up 0.2. from the winter survey but down 0.5 points since last summer.

BMW is another franchise that regularly scores well although they have had a few surveys where their score has fallen beneath 8.0.

Citroen has also seen its score fall significantly by 1.8 to 5.4 since the winter survey.

Back in the summer of 2013 Citroen hit a high point of 7.0, but this has steadily fallen away.

Alfa Romeo is the second worst performing at 3.8.

It has fallen by nearly a whole point from the previous survey where they scored 4.6.

Alfa Romeo has generally always resided beneath the average of the table but it has scored as high as 5.9 two summers ago.

Jaguar is third from bottom, having moved up two places from the foot of the table in the winter.

It has regained some of the score they lost last winter increasing from 3.7 to 4.2.

Volkswagen are fourth bottom with 4.5, up by 0.3 since the winter but down 0.4 since last summer.

Volkswagen has had a few difficult surveys over the past year.

“The issue seems to predate the emissions issue and suggests the problem is as much about the relationship between the dealers and the manufacturer as anything else,” said Robinson.

Mitsubishi are fifth from the foot of the table.

Mitsubishi, unlike Volkswagen, have not traditionally scored highly but have previously sat comfortably mid-table having scores in the fives and sixes, although in the summer of 2012 it scored 4.4, a level similar to its current one.

Peugeot has seen the most significant improvement in score increasing by 2.1 points from 4.3 to 6.4.

The network has been struggling near the foot of the table in this question but are now scoring just above the average of 6.4, something it has not previously achieved in the past four years.

Renault made similar progress increasing its score by 2.1 as well. It scored 6.6 in this survey and similarly moved to above average from the bottom half of the table.

Both Renault and Peugeot have seen significant improvement in scores across a range of questions suggesting both franchises have made good progress with the relationships with their dealers.

This is another franchise that has moved from the lower end of the table to midway with a score just above average.

In all, 13 franchises improved their scores from the winter survey and a similar number saw year on year improvements from the summer 2015 survey.

The greatest decline in score was from Citroen, down 1.8 to 3.6. This was in contrast to both the other French franchises of Peugeot and Renault.

The fall is less severe when compared to the survey of last summer where the network scored 3.0.

However, it is “concerning” that Citroen is 3.4 points below its recent high of 7.0 achieved in the summer survey of 2013.

Mitsubishi’s score had the second highest decline down 1.7 to 4.6 from the winter.

From the Summer 2014 survey until this survey the network’s score has been comfortably in the sixes.

Nissan had the third largest decline in score falling 1.3 points from 6.6 to 5.3 since the winter.

This is its lowest score for some time and two whole points below its most recent peak in the summer of 2013.

Audi, Alfa Romeo and Vauxhall all had declining scores worth mentioning.

In the winter survey in 2014 the franchise scored 9.1 for this question but it’s scores have steadily eroded since then until reaching their current level.

The score is still above average but at 6.4 would suggest most of its dealers are fairly neutral about this overall rating.

Overall, 10 franchises saw their scores decline this survey, one less than in the previous one.

This year’s NFDA summer 2016 DAS survey had 1,746 respondents from a total participating dealer network of 4,090, which equates to a response rate of 43%.

This is the highest return ever, surpassing last winter’s high of 39%. There were 28 franchise networks in the survey which represent a range of dealer sizes and ownership type from across the UK. 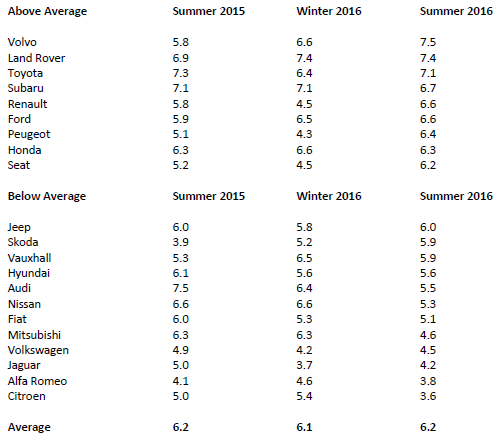