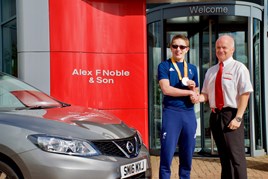 Alex F Noble & Son congratulated Paralympic silver medallist Scott Quinn on his success in Rio when the pool star paid them a visit to thanks the retailer for its support.

Midlothian-based Alex F Noble & Son Nissan sponsored the 26-year-old, who has Crouzon syndrome, and were delighted to see him secure a medal for Team GB after being edged into silver medal position by the tiniest of margins by fellow Brit, Aaron Moores the SB14 100m breaststroke final.

Alex F Noble & Son Nissan had previously presented Quin with a stylish Nissan Pulsar I.5DCI N-Connecta car on an initial twelve-month sponsorship to help Scott’s mum, Eileen, take her son from his home in Loanhead in Midlothian to the Royal Commonwealth Pool in Edinburgh for ten training sessions as well as his physio and nutritionist appointments.

Eileen said: “We’re very grateful to Alex F Noble & Son for the use of the Pulsar. The car is so fuel efficient, it’s saving us a fortune in travel costs and making life so much easier for us.”

Alex F Noble & Son Nissan sales manager, Gordon Campbell, said: “Those that watched Scott’s final would have been on the edge of their seats as it was such a close run thing.

“Scott did incredibly well and is obviously a huge talent. We’re delighted the Pulsar is making a big difference to his rigorous weekly routine which is clearly producing results.”

Quin is already training hard for his next big challenge; the SB14 100m breaststroke event at the Para World championships in Mexico City next year.

Scott said: "It was great to know that I had the support of the team at Alex F Noble & Son while I was out in Rio. Now that I'm back home focusing on training again, travelling in the Pulsar makes all the difference to my daily regime”.