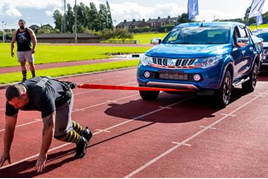 The dealership, of Huddersfield Road, Barnsley, sponsored the event at the Dorothy Hyman sports stadium in Cudworth, and provided two L200 Series 5 vehicles for athletes to attempt to pull over a 20m course.

Dave Thornton produced the fastest time of 22.57 seconds in the event which saw both cars linked together to produce a combined weight of 3.7 tonnes.

Andrew Jackson, dealer principal of Harratts, said: “The Highland Games Strongest Man Competition lived up to all expectations and it was a great weekend watching the athletes trying to pull our L200s in the fastest time.

“The Mitsubishis got a lot of attention from the crowd and we are delighted to have been part of this fantastic event.”