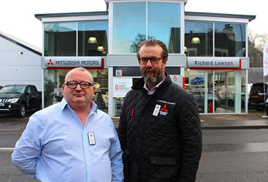 A family-run business has opened its second Mitsubishi dealership in Tayside following the success of its showroom in Dundee.

The opening of Richard Lawson Mitsubishi, in Burrelton, sees the business increase its coverage into the Perthshire area, adding to Tayside covered by Autoecosse in Kingsway East, Dundee.

Managing director Richard Lawson, who has been in the motor trade since 1971 and founded Autoecosse in Dundee in 2005, said: “This new site allows us to expand into the agricultural and business community in Perthshire as well as serving the county town of Perth and the many rural towns in the area. Perthshire is ideal 4x4 territory and the Mitsubishi range is ideally suited to the region.”

The dealership will employ a team of 10 staff.

Last year 12 Mitsubishi dealerships opened in the UK and Richard Lawson Mitsubishi is the seventh in 2016.