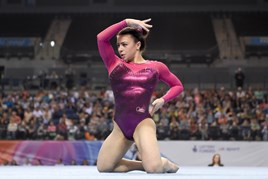 JT Hughes certainly did not see the number of vehicles leaving its forecourt take a tumble when it became the official fleet partner of British Gymnastics.

The Shropshire-based Honda dealership, which has sites in Newtown, Shrewsbury and Telford, has so far supplied more than 40 cars to Britain’s top gymnasts.

“The sport is enjoying a real golden era in Britain at the moment, so it’s exciting for us to be able to play a small role in supporting that.

“We are immensely proud of the team’s performance in Rio and hope to continue to support them in their endeavours, both in and out of the gym.”

Claire Jackson, head of marketing and communications at British Gymnastics, said: “We’re delighted with our athlete relationship with JT Hughes.

“By supplying brand new Honda Civics to a number of British Champions, it has supported our gymnasts’ Olympic journey and continues to support their ongoing training and engagements.”