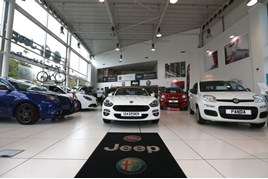 Richard Hardie has opened the doors of its new Fiat, Alfa Romeo and Jeep facility following its acquisition from Bristol Street Motors.

The opening of the dealership on Scotswood Road is expected to see the group’s annual turnover increase by 25% (2015: £47.1m), according to an article in the Newcastle Chronicle.

Speaking about the takeover, director Nick Hardie, said: “We’re extremely pleased with how business is going and this latest acquisition highlights our recent success.

“We have enjoyed working with the Fiat group with great success at our Silverlink and Ashington sites over the last eight years and have been keen to expand with their sister brands Alfa Romeo and Jeep.

“When the opportunity came up to become a regional partner for FCA group (Fiat Chrysler Autos) which would require us to acquire the Scotswood Road site, we jumped at the chance.”

Richard Hardie has already enjoyed a prosperous year, including the launch of its new Fiat and Abarth Centre in Sunderland this August, which was an expansion of its existing Peugeot centre.

General manager at the new facility, Ryan Luke, said: “It’s fantastic to see Richard Hardie now in Newcastle and it’s very exciting for everyone at the Company.

“We’ve already established ourselves in several key locations across the North East and are reputed as the one of the region’s best traders, so it’s great to have such a central location in such an important and vibrant city.”

Richard Hardie will hold an official launch weekend in November to coincide with the arrival of the all new Alfa Romeo Giulia.