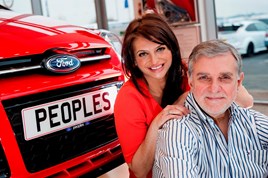 AM100 dealer group Peoples has reported record record profits, turnover and year-on-year sales for the fifth year in a row in its annual results to the year ended July 31st.

The largest independent dealership in Europe retailing only Ford cars and commercial vehicles has published details of pre-tax of £7.05m on turnover that grew £23.9m to more than £260.6m for the period.

Sales across Peoples group, which comprises four dealerships in the north-west of England and three in Scotland, totalled 18,354 vehicles, a year-on-year rise of 5%.

Peoples chairman Brian Gilda put the performance – the best in the group’s 33-year history –down to “laser-like focus” by the company’s senior management team.

“The outstanding loyalty of our customers is what makes these results special,” he added.

Gilda was scathing of the government’s hand in the UK’s current economic situation, however, and said that there would be no opportunity to take the “foot off the gas” with uncertain times ahead. He said: “In my 33 years as CEO of Peoples, I thought I had witnessed every combination of recession, financial turbulence and government incompetence to last a lifetime.

“The combination of government actions north and south of the border along with the unknown implications of Brexit could lead to a slowing of consumer confidence with the likely collateral damage on results.

Gilda said that the group had been discussing expansion plans but wanted assurances about the economy before moving forward with any immediate investment.

Peoples employs 405 people across its dealerships in Scotland and England and the company invests heavily in staff training to deliver the highest level of customer service.

As part of Peoples’ Social Responsibility Policy, the company led the way in March 2013 by introducing a salary scheme which paid employees at least 10% above the Government’s original national minimum wage with no age restrictions.

Group Strategy and Operations Director Nicola Gilda said: “After-sales are vitally important to the business. We value our customers very highly and we want them to know that.”

Echoing this emphasis on customer service at www.peoplescars.co.uk, Brian Gilda pledges: “If you were any less than completely satisfied, or if someone from Peoples lets you down, I want to know about it.

“The buck stops with me. Therefore, I invite you to contact me at any time on my personal email address brian.gilda@peoples-ford.co.uk and I promise to be in contact with you within 24 hours.”