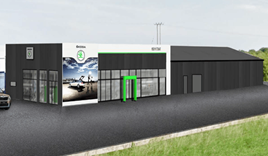 County Down-based dealer group Mervyn Stewart is poised to create 20 jobs with the opening of a new £2 million Skoda facility.

The group, which announced the opening of Northern Ireland’s first Infiniti dealership earlier this month, is currently developing a 12,000sq-ft site for the Skoda facility which will be located between Bangor and Newtownards.

Mervyn Stewart managing director, Stephen Stewart, told Belfast Live: “We have represented Skoda in Belfast for 15 years and were delighted when we were given the opportunity to represent the brand in North Down.

“The success of the award winning Skoda range has increased the market share and it makes North Down an important territory for the brand and a great opportunity for further growth for Mervyn Stewart.”

Stewart said that investment in the new Skoda facility – due to open in mid-December – had been made possible thanks to the backing of Danske Bank.

Initially opening with the help of a temporary showroom facility, move introduces the family-run business to the Japanese premium brand’s network.