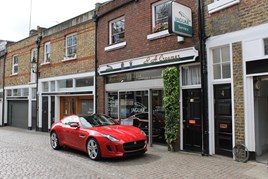 The Queen’s Jaguar supplier will be forced to close its doors for the final time at the end of the year after it failed to meet JLR’s strict dealer standards.

Kensington-based R A Creamer & Son will end its 90-year history with the British car brand when it hands back its royal warrant and ceases to trade later this month.

It also brings to an end 40-year relationship with the royal family, for whom it has supplied vehicles for the past 40 years.

Dealer Principal Michael Quinn, the grandson of Jaguar founder Sir William Lyons, originally announced the business’ closure in January, but stated on Friday that the move was now imminent.

Quinn said that the closure had come about “in no small part to the changes in our business that we have been forced to face which have challenged us in a way that we now feel that we cannot sustain the current business model, or rationalize the level of investment required”.

Speaking to The Telegraph, Quinn added: “The majority of dealers have been expected to invest considerably and upgrade their businesses to improve capacity, professionalism and appearance. This involves great financial investment and property expansion, and would have required us to move our location.

“Both these factors would have added genuine complications to our business and the decision was taken not to embark on an expansion which might risk our ability to care for our employees. And frankly, our customers told us they did not want it and liked the fact that we were unique, customer-focused, almost 'old-fashioned' firm.”

R A Creamer & Son was expected to finalise the sale of its 10 properties near Kensington Palace – expected to amount to tens of millions of pounds – in the coming weeks.

Quinn said that the retailer’s 14 staff would be taken care of through the estate of the business’ last owner, the late Syd Creamer.

A spokesman for Jaguar said: “Over recent years Jaguar has totally overhauled its car range with the launch of class-leading new models like the XE sports saloon, XF executive saloon, F-TYPE sports car and the recently revealed F-PACE performance crossover.

“Jaguar sales are increasing as a result and we are asking all authorised Jaguar centres to upgrade their facilities to cope with increased customer interest.”